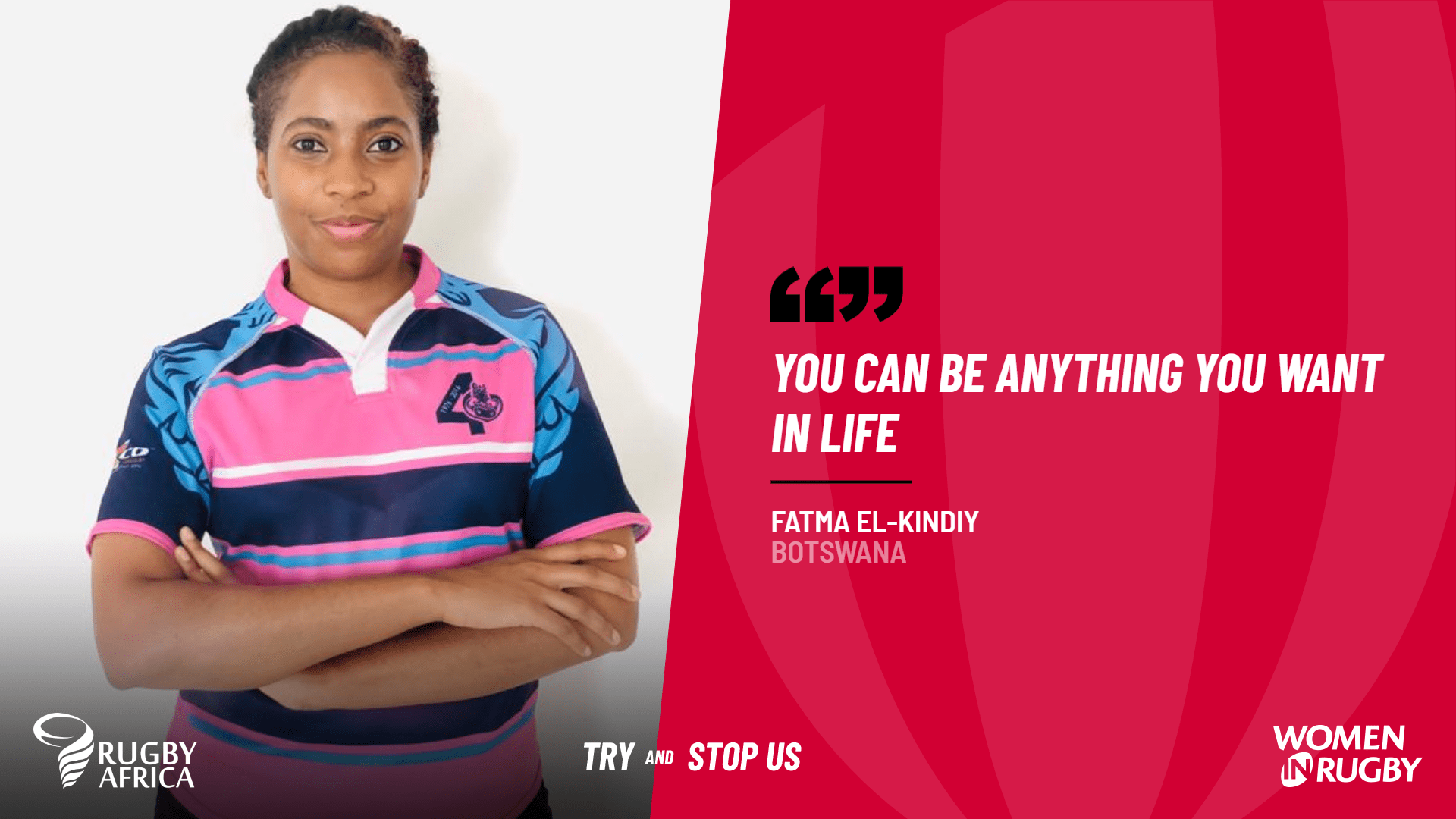 Fatma’s journey in rugby began with coincidence, much like many of the greats in the game, Rugby has been a quest of growing one’s confidence. Back in 2015, without any prior experience in playing rugby, Fatma had only attended rugby games as a spectator, most of which were only played by men. After a life changing suggestion for a new hobby from a friend, she made it out to the rugby field behind her office and there her story began, with the support of other female players. When she picked up the oval ball for the first time, she knew that she had found what she had been searching for.

Despite champions of Rugby in Botswana like Fatma campaigning for its broad-based promotion, Rugby and more importantly as a sport for women, has largely remained a sport which exhibits great potential for growth. Fatma exclaims that in Botswana, Rugby for women is hardly discussed. On the other hand, this has not left her, and other Unstoppables demotivated, in fact the value of their work is the single greatest force behind the grassroots development of the game. Her work has been applauded by World Rugby and Rugby Africa, amongst many other organisations and institutions seeking to promote women empowerment. Through the work of Fatma and others, future sports women will join or learn from the sport.

In her own career as a player, Fatma has seen a marked improvement in the participation of more teams in the women’s league. With the number of players increasing over the years, she anticipates that there will be more athletes from school rugby, advancing to league rugby. Further to this she believes that there will also be more women as coaches and referees in the near future- unstoppable.

As part of her outreach efforts, Fatma launched the “A Try for Change”, which is a grassroots initiative to empower girls through the sport. She and others seek to conscientize young women and girls to grow their self-confidence, as a means of unlocking their true potential in society. Rugby is used as a medium of instruction, but the goal of her work is to empower attendees to become agents of change in their respective communities- on or off the field of play. The programme is targeted at primary school leavers and includes modules on introspective exercises, recreational activities with learning objectives, mentorships, as well as preparatory programs in enterprise development.

Coming from a conservative background which does not prioritise the involvement of women in sports, Fatma has vigorously worked to change perceptions of elders and community leaders, to work with their support. She has opened way for reports and researched findings, to find their way into the hands of key decision makers. Overall, the programme has received a positive reception from participants, teachers and the Botswana Rugby Union, and plans are already afoot to run ‘A Try for Change’ again in the new year.

Based on the feedback she has received working with young girls, Fatma used the global “Try & Stop Us” campaign to address the issue of Gender Based Violence affecting women and children inher community. As an Unstoppable leader, she is breaking the silence of abuse in communities by raising awareness around civil liberties and justice. She deeply empathises with young girls who are not taught about building their confidence in school, as the priority is generally put on teaching the standard course curriculum. Sessions with Fatma and her team have become safe and supportive structures for personal development in the schools and communities they serve.

Fatma believes that instilling self-confidence in young women sets them up for life, not only for them to be leaders in the future, but more importantly now, for them to be able to tackle head on collisions with Gender Based Violence and many other scourges of society.

President of the Women’s Rugby Advisory Committee at Rugby Africa, Ms Paula Lancoemphasised that, “the WRAC and creation of its sub-committees will ultimately help increase awareness of women in rugby, attracting more tournaments and partnerships with sponsors, increasing the overall popularity of the game in the continent.”

According to Maha Zaoui, Women’s Manager Rugby Africa, “With the impact COVID-19 has placed globally, we are able to work with the sub-committees to overcome challenges the pandemic has placed on world sports and identifying untapped opportunities,”.

For Fatma, Rugby has been life changing not just for her career as a person, but more importantly it has empowered her as an individual to transform the lives of many. Her personal journey has become a reference point for others, who share in her passion and struggle for inclusion in different parts of their lives. Her outreach work has won many over and today has set the foundation for unstoppable future female leaders in Botswana and Africa at large, who have been transformed through the philosophy of the game.