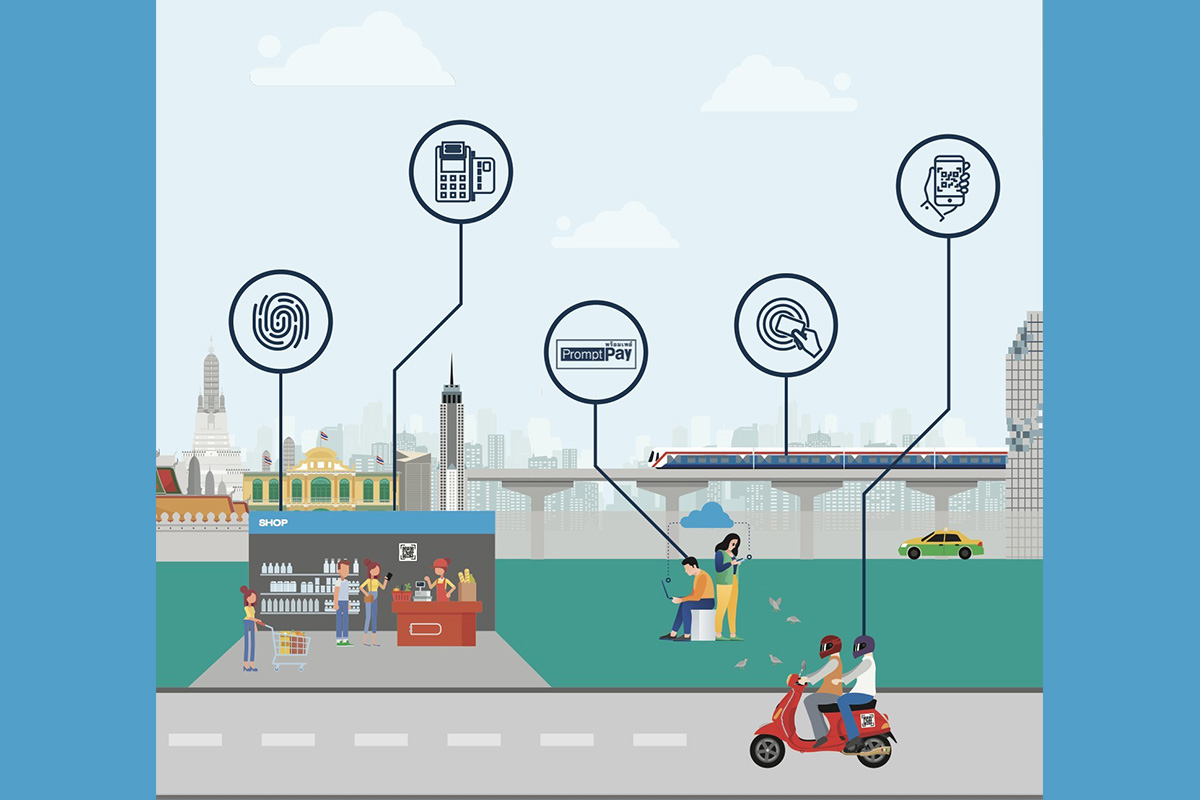 The rapid development of Thailand’s e-Payment landscape has made it an essential part of modern Thai life, allowing unbounded global commerce and accommodating the rise of the “New Normal” during the COVID-19 crisis, while setting the scene for the Kingdom to steadily evolve into a “cashless society,” according to a report published on the Thailand NOW website.

The advances are the result of careful planning and development over the past six years of the rollout of financial technology services and systems, the report said. That level of preparation allowed the country to be ready to implement solutions needed when the arrival COVID-19 accelerated the adoption of technology by Thai consumers.

Thailand’s move towards e-Payment has been driven by the National e-Payment Master Plan, which was launched in 2015 with the aim to transition the Kingdom to a digital economy and to bring economic progress for all in the country.

The plan’s five core elements are the PromptPay system, launched in 2016 to allow real time transactions to take place using national ID or phone numbers; the multiplication of EDC networks and tools that eliminate the need for cash; the digitization of the tax system; the establishment of a state e-Payment system for efficient welfare distribution, and the promotion of electronic payment systems.

E-Payments are overseen by the Bank of Thailand, the country’s central bank, supports the National e-Payment Master Plan with its own Payment Systems Roadmap, which states, “Digital Payment is to be the most preferred choice in efficient, safe, low-cost payment systems that meets users’ needs.”

Arguably the greatest boost to e-Payment has been the proliferation of smart mobile phones, which placed access to fintech and digital money services in the pockets of everyday people. Further driving e-Payment has been the advent of the Quick Response (QR) code, a system invented in Japan in 1994, that allows for actionable data to be read by smartphones. Harnessing QR codes for e-Payment was spearheaded by Chinese e-commerce and social media giants Alibaba and WeChat and led to their popularity throughout Asia, the report said.

The mobile banking applications, that streamlined the myriad of financial services into safe and user-friendly interfaces, have all but replaced traditional in-person banking and pushed e-Payment into the Thai mainstream. The mobile banking apps, first introduced by Kasikornbank in 2010, then by Krungthai Bank and Siam Commercial Bank in 2012, had initially limited functionalities, but they have now effectively set the stage for Thailand’s present e-Payment landscape.

Users quickly started to adopt these new tools. Just one year after its launch, the PromptPay system had logged over 718 million transactions and, by December 2018, counted 46.5 million users, over half the country’s population, the report said, citing the National e-Payment Committee assessment.

All of these developments proved especially valuable when the COVID-19 crisis started in early 2020, the report said.

Needing to distribute aid nationwide while maintaining social distancing, the Thai government was able to use the e-Payment infrastructure  provided by programs such as PromptPay to effectively carry out its social services.

Using the e-wallet Pao Tang app, assistance programs Rao Chana and Mor 33 Rao Rak Gun provided direct monthly payouts to those in need during the pandemic. The Co-Pay program saw the government pay for half of purchases made by users who simply had to make their payments via the Pao Tang app, which also supports Ying Chai Ying Dai, another Government program, granting vouchers in users’ apps to stimulate commerce.

Furthermore, the “New Normal” realities of remote working and learning, food delivery, and online shopping affirmed the need for e-Payment as an element of app-based services, the report said.

Conditions imposed by the pandemic even played a part in establishing Thailand’s first unicorn, e-commerce service provider Flash Group, which announced in June 2021 it had reached a valuation of over US$1 billion, as online retail soared due to COVID-19.

The development of Thailand’s digital economy e-Payment involves cooperation with regional partners, and the central bank has moved to establish cross border arrangements with its counterparts in Malaysia and Singapore to facilitate retail e-Payment transactions for consumers and businesses in Thailand with their counterparts in both countries.

Also, in a forward-looking initiative, the Bank of Thailand has since 2019 worked on a joint research project with the Hong Kong Monetary Authority, regarding the development of central bank digital currencies (CBDC) and block-chain technology.

This ultimately benefits companies looking to improve their ESG disclosure as well as investors wishing to build socially responsible portfolios, which are known to out-perform the market.

All combined, e-Payment thoroughly deserves the attention and support it is receiving in Thailand, offering ease and financial empowerment to individuals and a world of potential for businesses at the national and regional levels, the report concluded.