Tag: The Canadian Association of Journalists 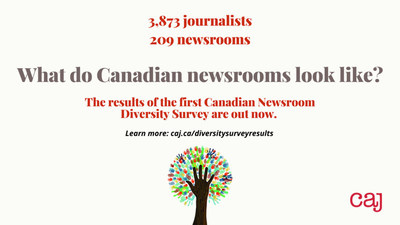 The Canadian Association of Journalists (CAJ) is pleased to release the findings of its inaugural Canadian Newsroom Diversity Survey.

The CAJ collected data on 3,873 journalists from 209 newsrooms across radio, television, digital and print media in Canada, making it the most filled out diversity survey in Canadian media history. The CAJ worked with data analytics experts at Qlik to develop an interactive website to visualize the results.

“For the first time, we are able to shed light—with hard data—on who is working in Canadian newsrooms,” said CAJ president Brent Jolly. “The CAJ is extremely grateful to the media outlets who filled out the survey, making it the most comprehensive diversity survey in Canadian media history.”

A 17-page report detailing national results, methodology, data limitations, and a full list of who participated can be found here.

Approximately 90 per cent of outlets that participated have no Latin, Middle Eastern or Mixed Race journalists on staff. About 80 per cent have no Black or Indigenous journalists.

Pennsylvania-based data analytics firm Qlik provided critical support for this project, including data analysis and visualizations of survey results, allowing users to interact with newsroom survey results based on variables such as race, gender and job role.

“Taking clear and positive action on complex problems – whether they are in business or society – is driven in large part by how well the audiences being affected understand the data behind the issue,” said Chuck Bannon, Director of Demo Team at Qlik. “We’re proud to be partnering with CAJ to help showcase the data surrounding this important conversation.”

The survey represents the most comprehensive data available to date on the gender and racial breakdown of Canada’s newsrooms and marks the beginning of what will be an annual, industry-wide study.

Key findings from the survey*

*Please note that percentages have been rounded to the nearest tenth, which means some totals may not equal 100 per cent.