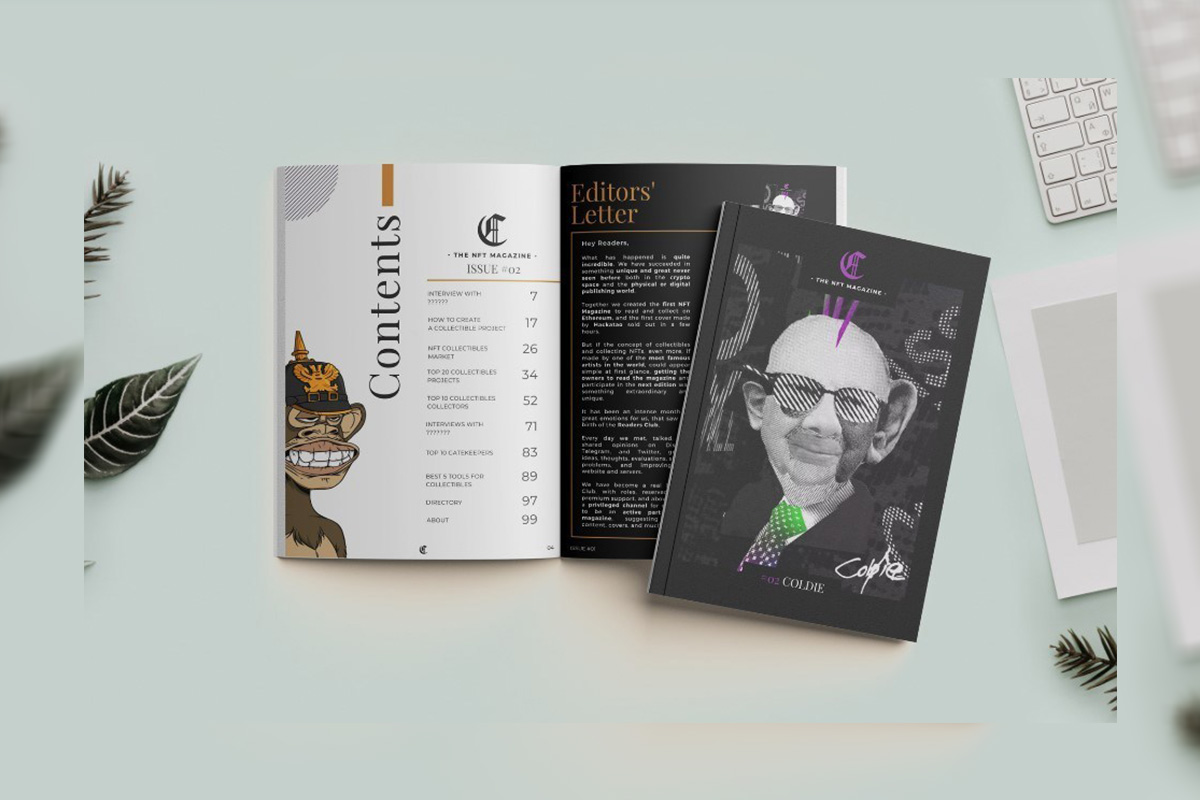 Covers tokenized or reinterpreted by crypto-artists, articles published on blockchain and much more. NFTs are entering all sectors, from art to tourism and now the publishing industry as Cryptonomist, a magazine focused on cryptocurrency is well aware.

An important step to an industry that has been in crisis in recent years, in 2020 the average publishing turnover fell for 9 out of 10 companies. NFTs application of blockchain technology is a way to further monetize culture and information.

The first magazine entirely made in NFT has launched, The NFT Magazine with the second issue published on Opensea’s platform.

The NFT Magazine in details

In the past few days, The NFT Magazine organized a private sale for its community which sold out with about 450 copies, with 250 copies left for the public sale.

This second issue of the NFT Magazine is with Coldie on the cover, a famous 3D artist who sold his crypto art for around $120’000, and is now selling his Snoop Dogg-dedicated NFT for more than $750’000.

Also the first issue of The NFT Magazine had an important artist on the cover: Hackatao, which was sold on November 2nd in less than 24 hours, selling 500 copies for $90,000.

Benefits and rewards for holders

Consumers buying The NFT magazine will have the rights to vote on the next steps of the projects, empowering the readers and letting them choose their preference on what to read. The Coldie cover was voted by the readers community.

Also, users that will have both the first two issues of The NFT Magazine in their wallet will have the chance to receive one collectible for free. This is Cryppo, the team mascot.

Collectibles are one of the most interesting trends in the NFT space, and they are not selling for 750K dollars during the last 30 days, according to nonfungible.com data.

Crypto Punks and Bored Apes are the most known projects in this field, but there is much more.

Going back to the NFT Magazine, a few days ago, the contents that readers will find inside the magazine were also revealed: not only the cover and an exclusive interview with Coldie, but also an analysis of trends in collectibles; a top 25 of the best projects, a top 10 of the best collectors and their interviews and much more.

While the first drop of the magazine had a limited edition of only 500 copies, this second edition will be in 700 copies. Unsold copies will be burned to ensure the rarity of the NFTs.

Burning is a common modality in the NFT and crypto world in order to provide an interesting scarcity for collectors, in a similar way to the art market.

How to buy The NFT Magazine

As is common with the NFT world, the NFT Magazine will be on sale on Opensea.

To buy these NFTs, you will need to have Metamask or another wallet compatible with Wallet connect (e.g. Eidoo) and some Ethereum to spend for gas fees.