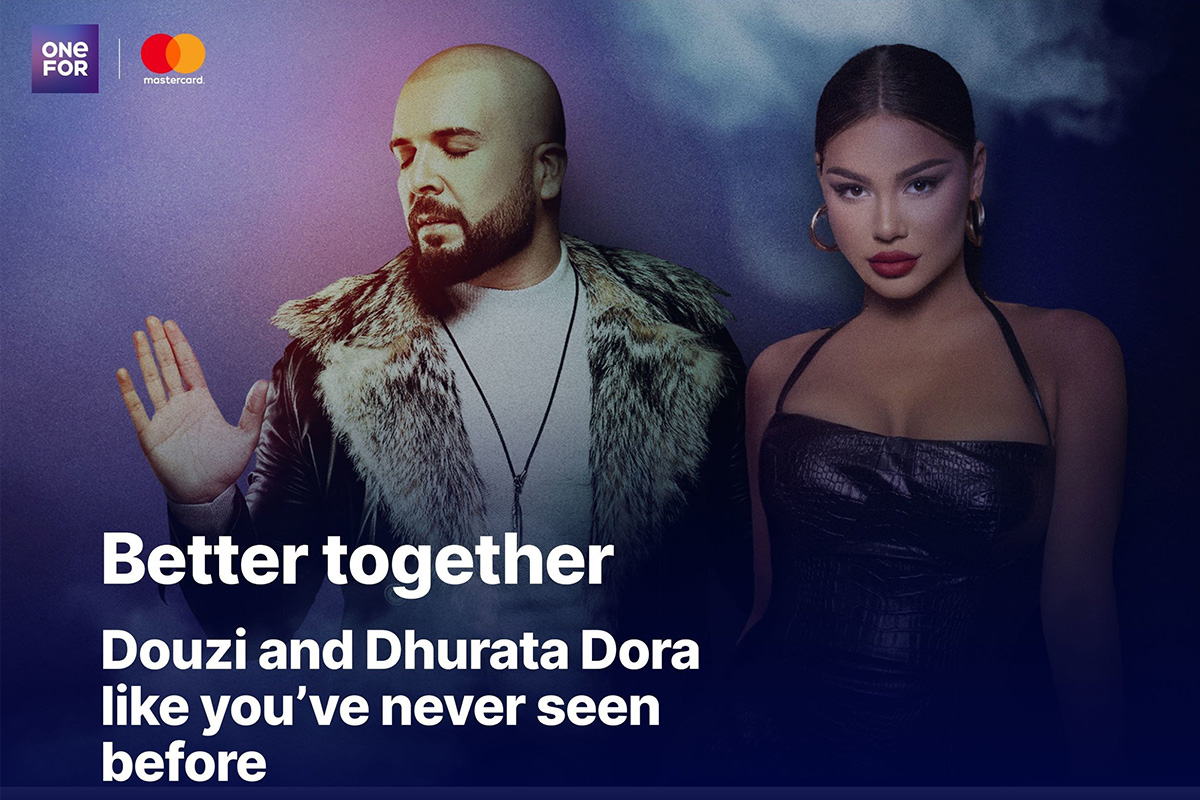 International artists Douzi and Dhurata Dora will feature in special dual live-streamed concerts on 30th September, 2021. The interactive concerts will be freely accessible for fans all over the world, courtesy of OneFor, the money app, in cooperation with Mastercard.

These concerts will be facilitated by LiveNation, providing a first time ever experience for an international audience. The concerts can be followed as a free live stream globally, and for a selected audience in ‘Watch Parties’ of up to six people, or in a ‘Digital Snake Pit’ where 50 participants can interact live with the artist during the concert.

The artists themselves will select and invite participants to the Snake Pit, while both concerts feature a 30-minute meet and greet with the artist. Participants for the meet and greet will be selected by a raffle among the fans that share the highest number of concert referrals. 2000 participants will be able to meet and interact in a Virtual Bar and join in with Watch Parties.

Songwriter, actor, dancer and producer Douzi is best known for hits like Amar and Bikhtissar. Born and raised in Morocco, where he had a breakthrough at a very young age with the anti-war song La Lil Harb, he now resides with his family in Belgium. Douzi won Celebrity MasterChef Morocco in 2017, wrote hits such as Douzi feat Jason Derulo  – Colors and had the NBA Halftime Performance. In 2020 he released his latest album, Khalik Maaya. His concert takes place on 30th September at 8pm CET.

Famed Kosovar singer Dhurata Dora was born in Germany from Albanian parents. Residing in and performing from Kosovo, she released her first single and music video, Vete kërkove, in 2011. In 2019, she had her international breakthrough with the hit single Zemër, featuring Soolking. Earlier this year, she released her latest single Mi Amor ft. Noizy. Her concert takes place on 30th September at 5pm CET.

OneFor will offer exclusive content to its users about the participating artists before and after the concerts. The concert experience itself will be freely accessible worldwide, attendance via the special features is limited to 2000 participants. Access to the live streams and raffle competition can be obtained through OneFor.com/live.

Marco Abele, co-CEO of OneFor, is available for interviews on OneFor, the Better Together initiative and the idea that money should be about more than transactions.

The media kit with images can be downloaded here.