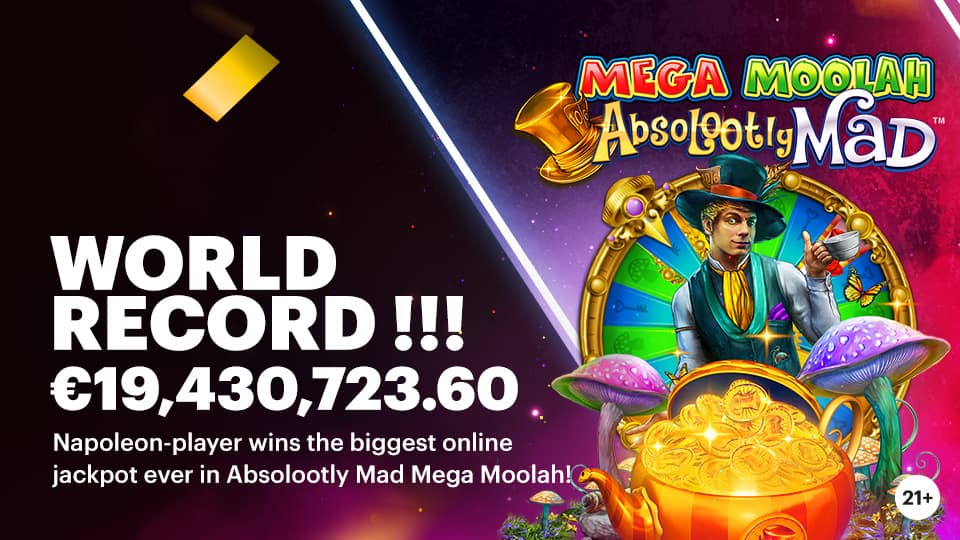 19,430,723.60 euros. Never before has a player anywhere in the world won a higher amount with an online slot game. And this gigantic jackpot goes to a player of Napoleon Sports & Casino. The Belgian won the highly exceptional Mega Moolah jackpot in Absolootly Mad  Mega Moolah, a game by provider Microgaming.

Just last week, another player at Napoleon Sports & Casino won a jackpot of over 2 million euros, but all records were broken on Tuesday. Mega Moolah’s progressive jackpot, a dream for players worldwide, just happened to fall.

The Napoleon player, who wishes to remain anonymous, saw luck taking his side in Absolootly Mad  Mega Moolah. With a stake of € 15, he managed to win more than 19.4 million euros in one spin. A thrill that cannot be compared with anything else in the world.

“The feeling at that moment is just indescribable. At first, you can hardly believe it and I think it will take a long time to sink in completely, ”the player told us. “It was on my last spin that it happened.”

“I read how last week a Napoleon player won a multi-million jackpot and of course I started dreaming about it as well. But to actually live this moment… I feel so lucky.”

“This is mind-blowing, ”says Tim De Borle, CEO of Napoleon Sports & Casino Online. “Last week we were already over the moon when a player won our 2 million Wowpot. But to have a second winner on our platform, for a world record-breaking amount, is just sensational and highly exceptional. This is a unique moment in betting history worldwide.“

“This is also the greatest thrill in the history of Napoleon. Everybody is filled with joy with this fantastic milestone.”, says De Borle.

Protecting the player, both in the event of a win and a loss, is a big priority at Napoleon. Tim De Borle explicitly emphasizes that the winner can receive guidance from Napoleon to deal with this win.

At Napoleon, players can take a shot at international progressive jackpots in multiple games. The progressive Mega Moolah jackpot and the Wowpot, both of which went to a Napoleon player in a week, both currently stand at over 2 million euros.

In Belgium, you must be at least 21 years old to legally play casino games online. The minimum age for sports betting is 18 years old.