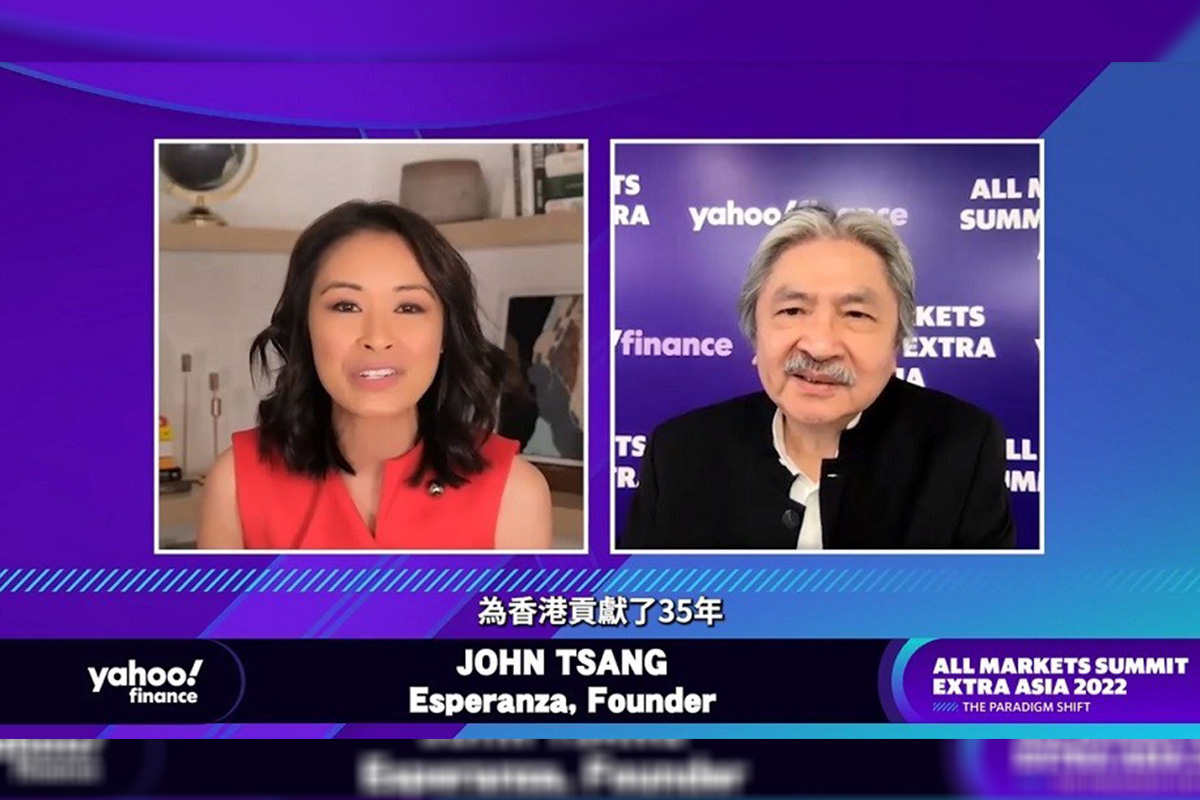 The Yahoo Finance All Markets Summit Extra Asia returns to Hong Kong! Since its event last year, the global economy has been on a rollercoaster ride as new technologies have shifted the way we interact, transact, and live in both real and virtual worlds.

Hosted on Wednesday 10 August, 2022 from 10am – 12pm Hong Kong time, this year’s Yahoo Finance! All Markets Summit Extra Asia 2022 brings together the pioneers, creators and industry forerunners from across Asia to further explore hot topics like digital assets, NFTs, Metaverse, Web3 and how these applications will shape on the economy of tomorrow.

The Paradigm Shift of the Future

Kicking off the event is John Tsang, former Financial Secretary of Hong Kong SAR and founder of NGO Esperanza, who lays out a blueprint of Hong Kong’s future with blockchain technology. He foresees more start-ups and collaborations with international partners. In his talk, he also shines light on his Choi Yeah NFT, through which he hopes to not only spread joy to everyone in the city but also to raise the awareness of the digital future that’s currently unfolding.

“The government can implement innovative policies to encourage the growth of the private sector. This can really help make better use of the innovations that we have. Collaborations are essential for the connection with the world at large,” says Tsang.

“Hong Kong excels in international business: we need to continue doing that even in the 21st century, with Web3 and the Metaverse.”

Following his Keynote Speech, Tsang joins Fred Ngan, Co-Founder & Co-CEO of Bowtie insurance and Stephanie Leung, Director of Group Co-CIO & Head of StashAway HK to discuss how blockchain technology has democratized insurance, investment, and startups plus the implementations within.

Offering more detailed investment perspectives on cryptocurrency and NFTs are Kinetic’s Co-Founder & Managing Partner Jehan Chu; Eddie Lau, Chief Executive Officer and Executive Director of ARTA TechFin as well as Alfian Sharifuddin, DBS Bank (Hong Kong) Limited, Managing Director & Head of Technology and Operations Hong Kong and Mainland China. They all agree that though cryptocurrency and the blockchain are revolutionary technologies, the industry still has a long way to go as traditional institutions – such as banks – explore such a volatile commodity and realize decentralized finance. They also shared their thoughts on DAO, tips on surviving the current bear market and NFTs’ profound function in protecting data privacy in the future.

Sébastien Borget, Co-Founder of digital company The Sandbox, reveals his insights on the metaverse’s skyrocketing influence in the way we live as well as its role in democratizing the playing field for creators who may not all have equal programming skills.

“If the whole society has accepted that it’s normal to interact, date, work, learn and earn on these virtual spaces, I feel like we will move into a true digital economy that will overcome the real-world economy,” says Borget. “We will no longer be constrained by the same restrictions of the traditional world. It will bring true inclusiveness and equality.”

In another Fireside Chat on the future of the blockchain, Sean Rach, Co-Founder of Hi – an app for trading both fiat and cryptocurrencies; Gavin Ho, CEO of Axion Global Digits and Brooks Entwistle SVP Global Customer Success and Managing Director for APAC and MENA for Ripple discuss blockchain’s boundless potential in making banking a universal privilege; a new-found mindset towards blockchain security and network risk management; plus the transition and balance between centralized and decentralized finance.

Trends to Watch amidst the Paradigm Shift towards a Virtual Economy

From finance to insurance, gaming to NFTs, the adaptation of blockchain technologies and the metaverse have stripped away the risks and restrictions prevalent in traditional spaces.

Gavin Ho, Chief Executive Officer of Axion Global Digits, says, “The application of these technologies brings down the participation barrier. They take away some of the risks that are traditionally inherent in this space. We’re expecting mass adoption in the future.”

As blockchain technology revolutionizes every aspect of our lives, governments worldwide are nudged to set standards so to create levelled playing fields for every involved party. The challenge, however, is to balance blockchain security and network risk management while ensuring the market remains competitive.

Brooks Entwistle, SVP Global Customer Success and Managing Director for APAC and MENA of Ripple, says, “Predictability is much better than an environment where we’re all trying to figure out where the line is ourselves. In the digital world of cryptocurrency, we’ve had downturns already, and we’ve learned a little more each time. I love the notion ‘the genie is out of the bottle’ because we aren’t going back. We’re getting a little better every time. This is an amazing time to build, but you must be very focused on what you’re after and limit your chase after bright shiny things.”

Albeit the swift acceleration and popularity of blockchain technology, all expert speakers agree that the future of digital will remain a hybrid one as traditional spheres decipher how to make the shift without hurting their bottom line.

John Tsang, former Financial Secretary of Hong Kong SAR and founder of NGO Esperanza, says “The traditional to digital transition is a continuum. We are now in a hybrid form – more traditional than digital – but this shift will continue to benefit consumers because blockchain technology lowers the barrier and costs all the while democratizing the whole process of participation. I think the transition will be a gradual one that’ll take time at the beginning.”

Fred Ngan, Co-Founder & Co-CEO of Bowtie, and Stephanie Leung, Director of Group Co-CIO & Head of StashAway HK, say education and transparency are paramount to advance to the next milestones.

“A lot of people think that a virtual business means that there’s no human touch, but in fact our representatives are on phones, live chats and emails always,” says Ngan, adding that transparency in the fine print and ample educational content are core brand pillars at Bowtie.

To make a decentralized blockchain realistic for regulated institutions like governments and banks, Kinetic’s Co-Founder & Managing Partner Jehan Chu says variations of security models have emerged such as the Binance Smart Chain (BSC) and, within it, the Spartan Protocol. While financial institutions do not have the same freedom as other trading platforms, Alfian Sharifuddin, Managing Director & Head of Technology and Operations Hong Kong and Mainland China of DBS Bank (Hong Kong) Limited, says banks must be especially active in setting policies and reaching out to clients who are completely aware of the risk landscape.

“We have to take a slower speed than what’s out there in the wild – those guys can push the envelope out there,” says Sharifuddin. “The precautions are huge for a regulated entity like us; but that’s not to say we can’t allow small sandboxes and pilots to go on in a controlled environment.”

The ubiquity of NFTs in art, gaming and entertainment is undeniable. Yet, the future, says Kinetic’s Co-Founder & Managing Partner Jehan Chu, is in data, whereby browser-based cookies will be replaced by data NFTs that users can own and share at their discretion.

“We look for fundamental value and utility in NFTs. What’s more useful than to be able to establish user profile, preferences and privacy in the Web 3 space. It will revolutionize and rethink the way data structures had existed in Web 2 and into a more distributed, more transparent world.”