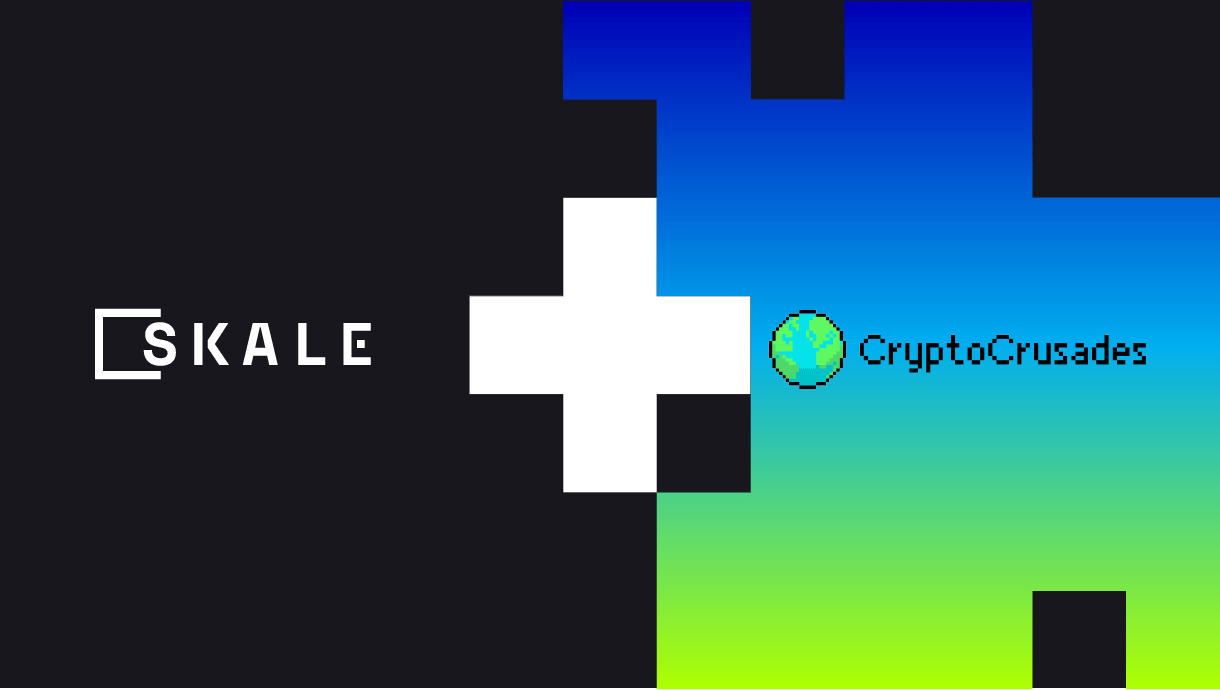 Mobile games alone brought in $81 Billion dollars in revenues in 2020, a massive number by any standard. It’s no wonder that many predict games will quickly become a massive driver of blockchain adoption, acting as the gateway to crypto for many consumers. We certainly think so, which brings us to our next Dapp, CryptoCrusades, one of the first grand strategy games on mobile that fully-incorporates blockchain technology.

There are many games working with SKALE in the Innovator Program and many gaming use cases. We are excited about all of them. However this particular use case within gaming is one we are very excited about – On Chain Gameplay.

What CryptoCrusades did that’s incredibly unique is that they didn’t just create a web 2 game and add some blockchain functionality for transactions and NFT ownership: The whole game is on-chain! All aspects of the complex and in-depth gameplay are decentralized and on chain utilizing smart contracts. It’s truly revolutionary. Everything, from your cities to your resources to your troops and even the battle system live on-chain in a secure, decentralized environment.

CryptoCrusades aims to address two main issues: Ownership and Integrity. The lack of true ownership in the video game industry makes it difficult for gamers to enjoy the fruits of their labor and guarantees those fruits will always be in their possession. The issue of integrity in centralized gaming is that trust of game play lives behind closed source centralized servers. Fairness, accuracy, and trustless game play are not part of a centralized offering. Many blockchain games run centralized offerings and only put rewards, NFTs, and results on chain. True On Chain game play means that the truth is in code, not within the control of a company or developer who tweaks code settings. CryptoCrusades is setting a new standard with blockchain gaming.

Why SKALE?
Putting game play on chain prior to SKALE was not feasible for three reasons: High gas fees, small block size limits, and slow block times. On chain game play requires a vast number of computations which can be expensive if you pay gas. Large block limits allow for more complex computations within game play. Fast blocktimes ensure the user experience and pace of play doesn’t suffer in comparison to off-chain game play.

SKALE emerged at the perfect time for their studio to collaborate with and the synergy has been amazing. SKALE’s team was easy to communicate with and has continued to be flexible for developers. With the scalability that SKALE provides, fast blocktimes, gasless transactions, and large block size limits, it allows them as blockchain developers to take blockchain technology to an entirely different dimension.

What SKALE features are CryptoCrusades utilizing?

What CryptoCrusades is saying about SKALE:

“Switching to SKALE completely solved our on-boarding problem with their gasless transactions. Free gas coupled with huge gas limits per transaction has allowed us to be able to include more complex algorithms, like our on-chain pathfinding and battle system. This means CryptoCrusades can be one of the first blockchain games that has in-depth gameplay that’s completely on-chain, all thanks to SKALE.” Sherman Meredith, Blockchain Lead, CryptoCrusades.