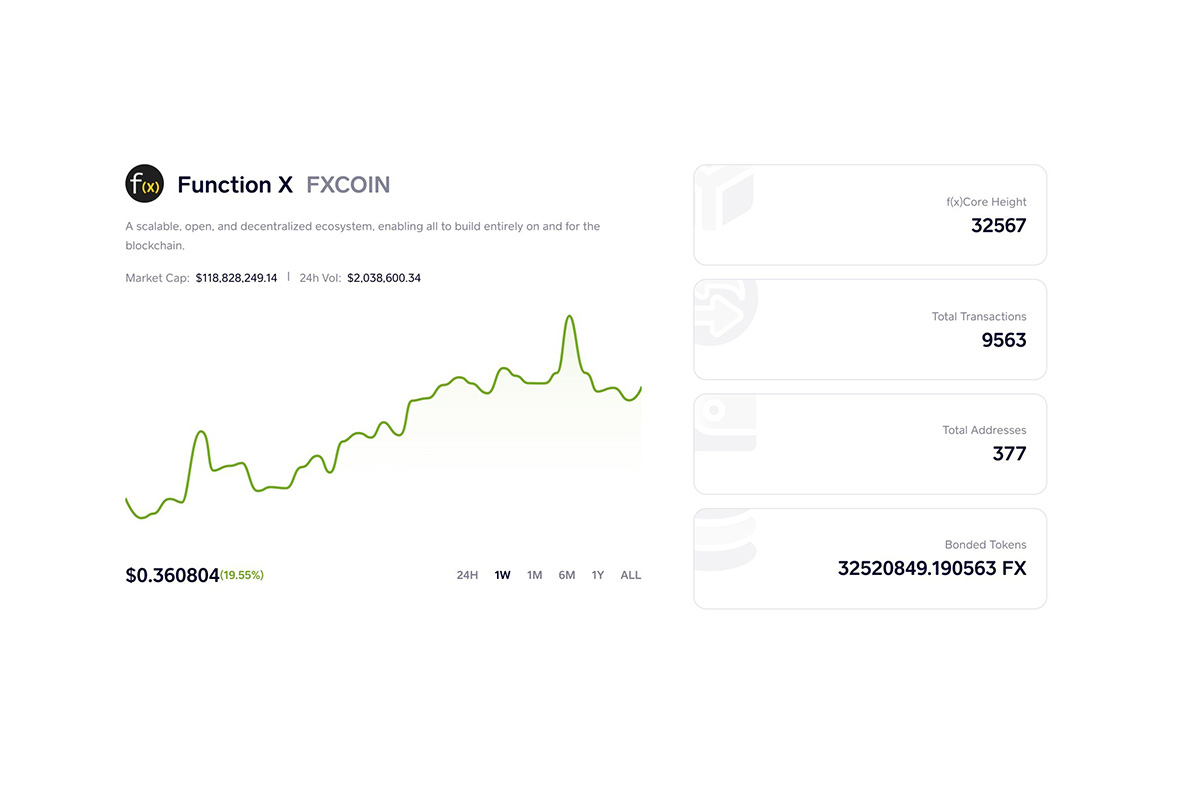 Developed by Pundi X Labs, Function X has a cross-chain architecture based on pBFT and PoS. Cross-chain, as the name implies, allows multiple chains to be part of Function X. By integrating various blockchain ecosystems (Ethereum and others), Function X is designed to increase the liquidity and value of digital assets created on the Function X network.

Rather than building an ecosystem that competes with Ethereum, Function X aims to leverage on its strengths, for example, by providing asset aggregation contracts, connecting to Ethereum smart contracts, and generating interest at the same time in both (and more) chains. While leveraging the existing Ethereum infrastructure, at the same time FX Core provides an environment with higher speed and cheaper fees.

The mainnet launch kicks off the governance stage, allowing Function X token ($FX) holders to participate in verifying block creation and receive block rewards via delegation to secure the network with 20 initial company-hosted validators (later will open to public validators once the operation of the mainnet is mature). The delegation is available on the f(x)Wallet, a non-custodial, decentralized wallet app that supports inter-chain and cross-chain transactions on multiple blockchain networks as well as providing decentralized finance services.

With the mainnet launch, the holders will be able to bridge their $FX in ERC-20 to the FX Core through f(x)Wallet. This means $FX will be able to be utilized on both Ethereum and FX Core. $FX will be the first digital asset transferable between Ethereum and FX Core. There will be no conversion / wrapping action needed, and the cross-chain transfer will be as simple and smooth as a usual on-chain transfer process.

The second stage of the launch will be the running of XPOS devices on the FX Core, which will give the Function X Mainnet a number of real-world use cases. Pundi X will utilize the custom chain built on the Function X network to verify real-world transactions, such as payment for a cup of coffee made using XPOS devices. This stage will demonstrate how well f(x)Wallet can directly interact with XPOS on-chain.  With this use case, it will also enable financial institutions that have built a custom chain on Function X to hop onto the XPOS’ custom chain through FX Core. XPOS will be able to provide financial tools and services on the Function X network.

To learn how to participate in Function X Governance as a delegator, visit: https://medium.com/functionx/function-x-june-hash-out-part-2-75e31446d82e

To learn about the roadmap and previous testnet reports :

Follow Function X on Medium, Twitter, Facebook, Reddit as well as Github for detailed documentation. If the community members are interested in sharing ideas and participating in building the Function X ecosystem together to make it better, join the official Function X Forum.