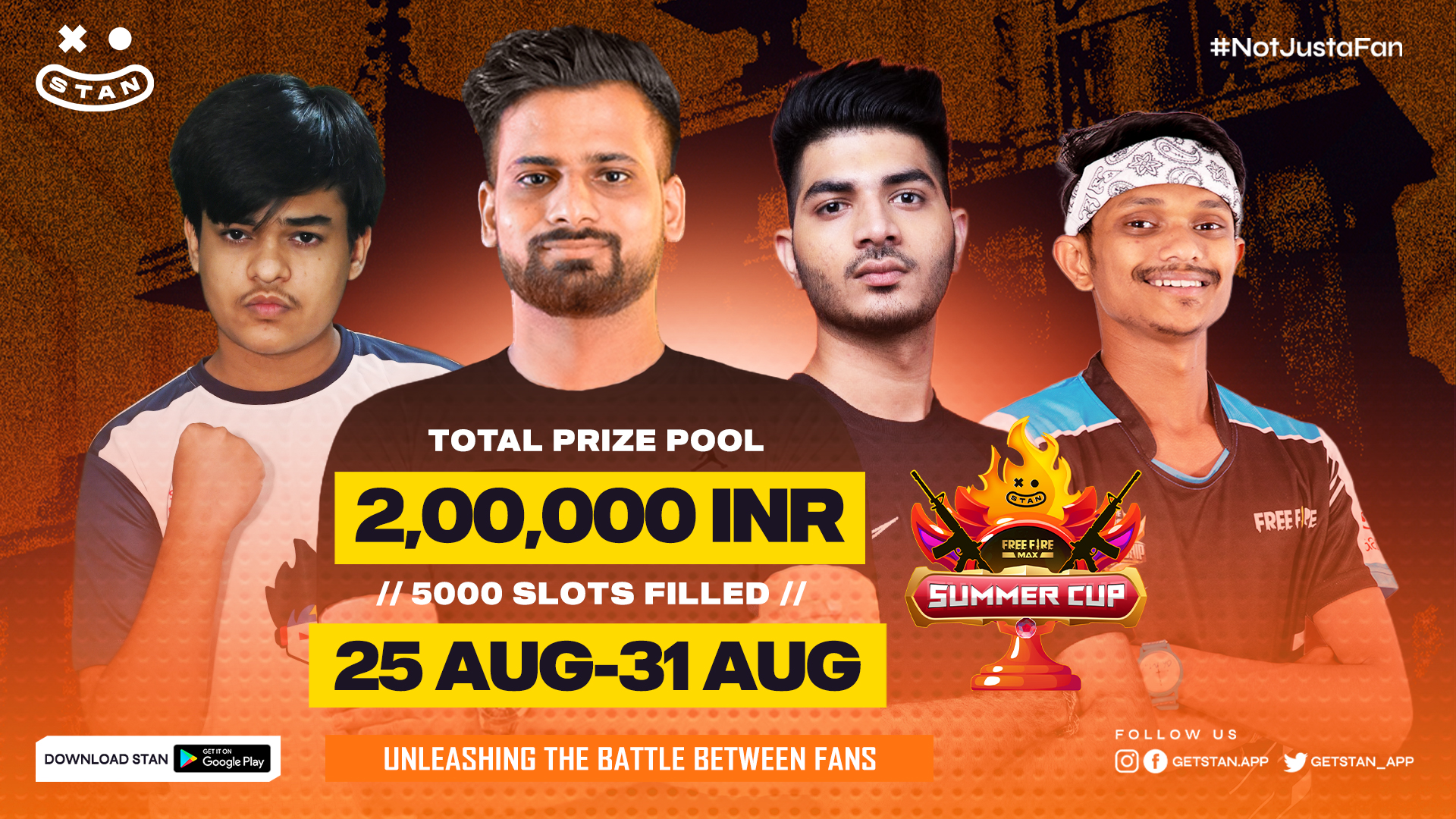 Free Fire Summer Cup, an ongoing squad-format Garena Free Fire tournament organized by blockchain-based esports fan engagement startup STAN, has now entered its Post Qualifiers stage, which shall involve the Quarter Finals, Semi Finals and Grand Finals – to be held from 25th to 31st August 2022. The tournament, which features a massive prize pool of INR 2 lakh, is currently one of the biggest third-party Free Fire tournaments going on in the country. So far, more than 25,000 people across India have registered for STAN Free Fire Summer Cup in less than 7 days since the tournament’s roll-out.

The Quarter Finals, Semi Finals and Grand Finals of the tournament shall be livestreamed on the YouTube channel of Platinum Esports. And in these upcoming stages, 36 qualified Underdog teams from the previously-held Open Qualifiers stage will be competing against a plethora of ‘invited’ pro Free Fire teams. Notably, the 26 invited teams for this tournament have a collective fan base of approximately 70 Million followers on social media platforms like Instagram and YouTube. Among some of the prominent ‘invited’ teams who are taking part in the tournament include – Team Mafias, Orangutan Esports, Chemin Esports and TSG Army, among others.

Speaking on the tournament, Nauman Mulla, Co-Founder & COO, STAN says, “Being a leading fan engagement platform in the esports and gaming arena, we constantly aim to give more and more superlative fan experiences to the users. And to this end, the STAN Free Fire Summer Cup is taking engagement to a whole new level, wherein emerging players will be able compete at the highest levels and against their favourite elite teams. We are excited and looking forward to a great gameplay in the upcoming stages of this tournament, especially in the ones involving the battle between popular pro teams vs. amateur (Underdog) teams that have shown great promise in the Qualifiers stage.”

The prize pool of STAN Free Fire Summer Cup will be distributed amongst the Top 5 ranked teams of the tournament, as well as the Most Valuable Player (MVP) and the Best Underdog Team, who will be rewarded with cash prizes of INR 15,000/- and INR 10,000/- respectively. Furthermore, during the tournament livestream, multiple giveaways will be conducted and corresponding rewards will be given out to the viewers. Additionally, STAN users will be able to predict the winner and the MVP of the upcoming Summer Cup matches by using STAN’s ‘Predict & Win’ in-app feature in order to get the opportunity  to win exciting gaming gears.

Notably, STAN, which has built an uniquely-crafted one-stop platform for the constantly growing pool of esports fans to optimally engage, play and grow closer to their idols, has already inked strategic partnerships with several leading Free Fire athletes, creators and teams in India. Post the completion of their ongoing tournament, STAN is planning to organize many more daily, weekly and monthly tournaments, which will be held under the newly-introduced ‘Play’ feature section on the STAN mobile app.